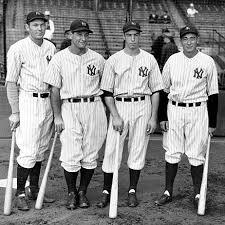 On Why I Love the Yankees…

October is here; it should be time for the World Series. In fact, the World Series winners should have been decided. But no. Now the season runs into November, while most baseball fans have tired of the game and moved on to Netflix. Bah, I say. Let us return to the days when we had a worthy number of teams – say, 1954, the year that the Orioles returned to Baltimore (sorry, St. Louis Browns). Yes, that was the year when teams were located where they should be. We don’t need baseball in the South or on the West Coast. The beginning of the end, 1957, when the Dodgers – well, I won’t deign to even write about that.

Now, I love the New York Yankees. Always have; always will. And not without reason, both subjective and objective. So, if you’re still with me, I’ll tell you why.

First, objectively, as a former Baltimorean, it is well embedded in my memory that the current Yankee team started in Baltimore. Yes. While the original Orioles of the National League was disbanded in the late 1890s, the team was reincarnated as an American League team in 1901. Then, as a result of a “misunderstanding” between the scrappy Oriole manager John McGraw and the League president, the Orioles morphed into the New York Highlanders, who, as all baseball aficionados know, became, in 1913, the New York Yankees.

Therefore, I maintain that supporting the Yankees is really a manifestation of loyalty to the city of their birth.

Second, subjectively, and this is close to my heart, the night watchman at my dad’s business was a Yankee fan. I knew this before I even knew what baseball was. Dick Young was his name. I doubt if he could read or write, but he had the wisdom of an old soul. He came to work early, and often arrived at the same time as I when I took the bus to the shop. He had his radio; later he had a TV, and knew how to get those Yankee games in those days before internet coverage was even dreamed about. He smoked cigars (King Edward Imperials)  , and would give me the boxes when they were empty. That’s where I kept my baseball card collection, so the mingled scent of bubble gum and tobacco infused the assemblage. Now, all these years later, one box remains.