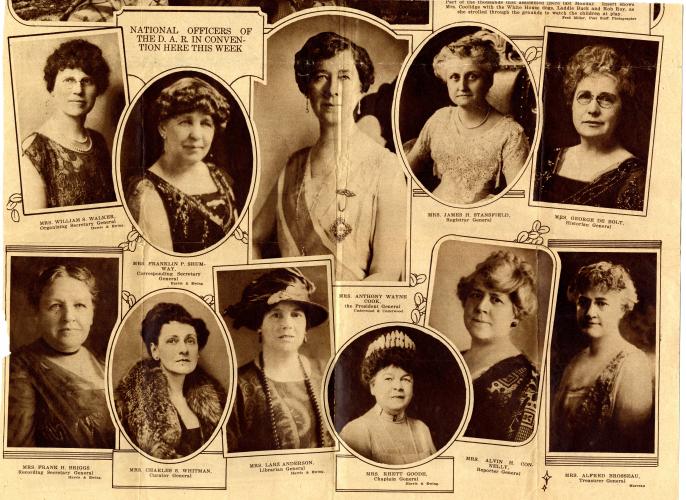 On Becoming (Maybe) a Member of the DAR –

I never thought much about the DAR; my knowledge was primarily limited to the Marion Anderson/Eleanor Roosevelt kerfuffle. I know they’ve changed, that they are struggling to be relevant. I’m sure they do good works, though taking credit for the deeds – or misdeeds — of one’s ancestors never made a lot of sense to me.

But I kept hearing a familiar voice: “I could have been a member of the DAR.” My grandmother’s words, she in high dudgeon when I, or anyone (everyone, actually) in the family pooh-poohed, or worse, ignored, her claims of illustrious family history.

She grew up in Admiral, Anne Arundel County, Maryland, a town that no longer exists, subsumed by the establishment of Camp Meade during World War I. Her family had the general store and post office there. Her father, a railroad worker, died in a work accident when she was a small child; her mother was left with four small children. They lived a hard-scrabble existence. I don’t know how much formal education she had, but she was a reader all her life, though her taste tended toward Romance novels of the day, and she possessed the loveliest handwriting I’ve encountered.

It was in that general store where, in 1904, she met and soon married my grandfather, a Baltimorean employed to install telephone lines. She loved the music of Stephen Foster and the sound of a fiddle, but she happily left country life for the amenities and supposed sophistications of urban living.

I’m sure she romanticized her youth, so proud of being an Anderson, though prior generations of the Andersons of Anne Arundel County had reproduced so prolifically that any land passed on was just a memory by her time.

“I could have been a member of the DAR.” We rolled our eyes and smirked. Now I find that it just might be true.

And so, as one of my New Year’s resolutions, I’m applying for membership in the DAR. Not to honor my grandmother’s memory so much, as to honor her longing; to say “I believe you.” This membership is for you, Rose Anderson, along with a sincere apology for not caring enough to listen to the yearning behind your story, for you were asking us to believe that you were “someone.”  I apologize for not understanding that, for not respecting, for not loving, for not even being kind.

And to tell you, if you can hear me, that I’m sorry. I wish I had done better.

Gramma, this one’s for you.