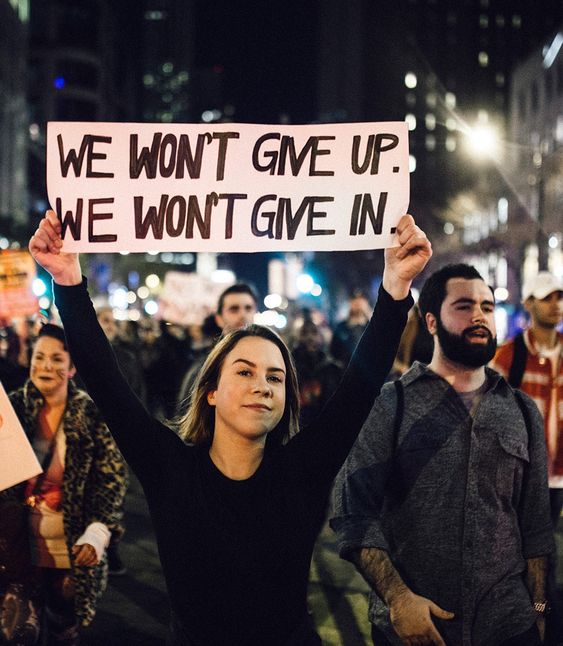 On Persisting; On Resisting

I’ve found it difficult to return to my rhythm, this measure of my day, a regularity of writing, reading, thinking. For the last weeks my hours have been spent focusing on doing what I can (not much) to combat the direction of the president and his minions. I’ve e-mailed, I’ve called, I’ve left voicemail messages. So many topics that to stick to one each day requires throwing a dart and wishing for the best. The issues that are top of mind and top of Facebook, and the issues that sneak by under the radar, just as insidious in their way.

I was with a friend this week, both of us commiserating that we resent having to spend our time, our energies on what should be considered a slam-dunk of agreement, of opposition to policies and actions that any human would consider so odious and wicked that anyone espousing them would be tarred and feathered and sent out of town on a rail.

And then we read of rallies supporting them, and wonder what our country has become, perhaps what it always was.

I found a post I wrote shortly after the election that included a statement that I keep close to my heart, even as the months roll on. It has been shared many times, and I cannot find the author. But did her words resonant, did they ever ring true. And I share them here, once again. Not my words, though I wish they were:
“I want my friends to understand that “staying out of politics” or being “sick of politics” is privilege in action.
Your privilege allows you to live a non-political existence. Your wealth, your race, your abilities, your religion, or your gender allows you to live a life in which you likely will not be a target of bigotry, attacks, deportation, or genocide. You don’t want to get political, you don’t want to fight because your life and safety are not at stake.
It is hard and exhausting to bring up issues of oppression (aka “get political”). The fighting is tiring. I get it. Self-care is essential. But if you find politics annoying and you just want everyone to be nice, please know that people are literally fighting for their lives and safety. You might not see it, but that’s what privilege does.
I also want to say to my friends who are new to this, my friends who have recently become more vocal, my friends who’ve seen the damage #45 has done so far, my friends who went to the women’s march — I am proud of you for getting involved. Don’t stop there. Keep having these discussions, keep talking about politics, stay active.
And when you read the critiques of the march from other progressive women who didn’t feel represented, don’t get defensive or discouraged. Activism needs critique. We need to ask ourselves where we were as Flint’s water has been poisoned, or where we were when Philando Castile was killed, or John Crawford or Eric Garner. If the women who showed up at the march showed up when people of color were murdered, it would stop.
Intersectionality means showing up even when the issues don’t affect us directly. Stay awake and stay active. We need you so much right now.”

And so I continue, every day, as the months and years roll on. I know it is small, but it is something. You know what they say about those snowflakes – alone, one might not mean so much, but just see what they can do when they accumulate.

Resist. Persist. Resist. Remembering that we are not alone.